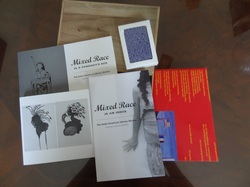 Our class will be participating in the Asian American Literary Review's special teaching curriculum on Mixed Race. Along with participating in the Digital Mixed Race Lab, we will be reading a small collection of twitter poetry Yes, Bay Area by Lyrics Born.  Through rigorous engagement with both texts, we will also create our own twitter poetry and wikipedia entries as digital investigations of the bay area and mixed race in cyberspace.

Links:
http://aalrmag.org/
http://mri.aalrmag.org/groups/lab-digital-mixed-race/
Studies on digitality and race began in the mid-1990s and produced significant publications from the “beginning of the Internet epoch” in 1994 well into the 2000s. Lisa Nakamura’s groundbreaking monograph ‘Cybertypes: Race, Ethnicity, and Identity on the Internet’ (2002) and the co-edited ‘Race in Cyberspace’ (2000) were the first to frame an analytics of racial representations online. ‘Race in Cyberspace’ dismantled the myth of the race-less Internet; “We believe,” the editors write, “that race matters no less in cyberspace than IRL (in real life).” Published just one after ‘Race in Cyberspace,’ ‘Technicolor: Race, Technology and Everyday Life’ (2001), edited by Alondra Nelson, Thuy Linh H. Tu, and Alicia Headlam Hines, argued for a focus not only on the digital divide but the “many interfaces where race and technology intersect.”

We hope to build on the vital work of current digital racial studies by examining how mixed race issues shape and are shaped by digitality. How might online social networks, video, film, blogs, video games, and electronic literature shape discourses of mixed race identity? Is literature about race and mixed race changing through digitality? How are races mixed in the digital age? Could digital tools offer us new ways of teaching and learning about mixed race issues? For example, Dr. Betsy Huang’s project of a digital registry of mixed race literary characters offers a new way for students to engage in creating an exhibit space that brings mixed race figures, often in the periphery, to the center of literary study. These questions and possibilities shape our lab. We hope to engage with the ways your courses are working through questions of mixed race through digital spaces. Specifically, we will work together–across campuses, classrooms, and computers–to co-create a wikipedia article on Digital Mixed Race and corresponding terms.

We welcome all those interested in racial theory, ethnic studies, new media, digital humanities, and science and technology studies to join us in this investigation and collaboration.